So yesterday (earlier today, Seattle time) I finally got to meet with Chawezi. This was after roughly 30 hours of flight travel (including layovers and connections), and a 5 hour drive from Lilongwe. My two World Vision escorts/interpretors and I got to spend a few hours with her at the hospital.

Arriving at the hospital, I felt a mixture of nerves (why was I nervous?) and some degree of surprise at the condition of the hospital. I mean, I kind of expected it, but this was one of the two best hospitals in the country, but it definitely was not any where NEAR a standard that would be acceptable in an industrial country. The quality of the care is probably fine, but the condition of the building (and the number of people crammed into the wards) was, well, less than superior.

After abriefly checking in with the head nurse, we went to see Chawezi in the ward where her bed was located (with about 20-25 other people). She knew I was coming, so she met us at the door. First impressions? I had forgotten how SMALL she is. She also has a huge, sweet smile, and was very shy at first. So there would be room for all of us to talk, we went outside to a small grassy courtyard to chat with her and an aunt who had come to stay with her during her stay at the hospital. She kept covering her face with her hands, which was really endearing. I had puchased a backpack for her and put some stuff in it (I'd been asked that I bring lotion and soap, so I did, plus a hairbrush, washcloth, granola bars and some hard candy). She was overjoyed to receive it.

While I was there I also got to meet with two doctors who are helping with her care. Mostly they told me what I already knew, plus their plan for treating her. A skin graft to help some of her sores heal, and new artificial legs (the ones she received last year were too heavy for her, and one of the feet got broken anyway). Getting her upright and off of her backside is critial to keeping those wounds/sores healed.

I also learned that the tailoring classes she took a couple of years ago couldn't do her much good until she learned to read and write, so we began to explore options for her to learn. She told me that once she learned, she'd send me a letter to prove her new knowledge.

Finally, I learned to that at least some extent, patients had to provide their ow food (???). So we asked them what food items they needed, and during lunch, I went to the local supermarket and got them some groceries (enough to last them a couple of weeks, most likely). Also got them laundry soap and a washbin for them to wash their clothes. (Yep, they have to wash their own clothes, and by hand.) We went back and brought them their supplies,spent a little more time with them, and left for the day.

All in all, it was a fantastic visit. I'm getting ready to head to breakfast, and check out of the hotel. Then we'll go back for another visit before making the long drive back to Lilongwe. I wish I could stay longer. I mean, after taking from Friday night until Tuesday morning to get from my home in WA to the hospital in Blantyre, it'd be nice to spend more than 3-4 hours total visiting, but that's how it goes.

Now, let's see if this photo will load... 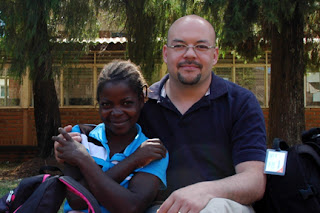